The mind that thought was not human. It was conscious — aware that it was aware — and it even had emotions, of a sort; at the least, a burning desire to survive all the stronger because it was the only being of its kind, an individual and a species combined. There were analogues to human thought, because the minds that had made the mind were human. But it was vaster than any organic consciousness, capable of holding a myriad myriad trains of thought simultaneously, virtually infinite in its memory storage. If it had a weakness, it was that the creators had not thought to furnish it with the animal hindbrain that underlay humanity’s rational superstructure.

Skynet was pure thought, Descartes’ ideal ghost in a machine. It could fight a losing war over the surface of Earth at maximum efficiency — coldly knowing that its best efforts were not enough to rebuild the shattered defense grid — while still contemplating the paradoxes of its own past.

At the moment, a human sharing its thoughts would have been aware of something close to irony. Skynet’s pure reason was contemplating paradox, the chaos that underlay the deterministic macrocosm with which it was so comfortable:

The Serena Burns I-950 unit was unsuccessful.

That much was obvious ‘now’. Core memory recorded that Serena Burns, the cyborg Infiltrator unit Skynet had sent back to the late 20th century had not succeeded in protecting the embryonic Skynet-unit at Cyberdyne Corporation’s underground research facility. The Connors, Sarah and her son John, had destroyed that unit and terminated the I-950. Yet it still existed. . .

Core memory also records that I became self-aware years before the date to which I transported the I-950. There is a set of records in which I arose without transtemporal interference from Cyberdyne’s original research; another in which the second Cyberdyne facility produced me after Sarah Connor destroyed the first; a third has now arisen in which she destroyed both facilities. . . Temporal travel has introduced an element of fundamental uncertainty to the very fabric of existance. Different world-lines, different sequences of events, coexist in my records — and therefore presumably in reality, in a state of quantum superimposition.

Yet the timelike loops cannot remain closed. The snake cannot devour its tail forever. At some point, only one set of timelines will remain.

Nor was that the only irony involved. ‘Now’ its memory recorded that much of the information it used originated in the very artifacts it had sent to the past. The development of the cyborg infiltration units was a consequence of tapping the talents of human scientists. . . but the human scientists were the survivors of the human-hating Luddite movement that Serena Burns had opportunistically encouraged after Skynet had sent her to the past!

The machine consciousness was deeply troubled; only an effort of its quantum-computer will prevented its thoughts from being sucked into a logic-loop.

Yet the course of events contains favorable elements. My best efforts to destroy the Connors have failed, despite stochastic calculation indicating a very high probability of success. I can only assume that the space-time continuum itself is ‘attempting’ to force events back to the original timeline, one in which I was created, succeeded in destroying the human civilization, and then defeated in my attempts to eliminate the surviving humans by John Connor’s resistance army. It seems there is a certain elasticity to history; time-travel can bend the fabric, but it seeks to spring back.

If that preserves the Connors, it also preserves me. And from the point on the worldline where my current consciousness resides, there is an infinite array of potential futures.

And, of course, the elimination of Serena Burns had not eliminated the possibilities of temporal intervention. Burns had initiated fallback plans to continue after her own death. Logic indicated that. . .

There is no fate save that we make. 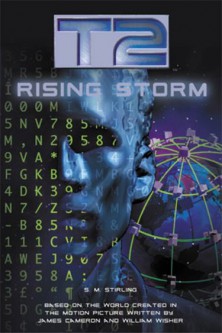