“He is coming!” Rudi whispered again.

Then he shook himself, and let his hand fall from the crystal pommel of the Sword. His helmet was already slung from the high pommel of the war-saddle, and the wind cuffed at his long red-blond hair, giving an illusion of coolness as it dried the sweat bred in the rage and heat of battle.

“Where? When?” Mathilda said sharply, her strong-featured face frowning a little under the raised visor of her own sallet.

It was a bright autumn noon, and the rolling hills showed a ghostly tinge of green under their summer’s cloak of golden sun-dried grass; the first of the fall rains had already fallen. It would have been a fair day, except for the thick drifts of dead men and horses on and around the hill where his rearguard had made their stand. Most of them were enemy—horse-archers from the wilds of Montana, men of the Church Universal and Triumphant. But more than enough were Montivalans; they’d held hard, the Yakima pike and crossbow regiments and the Association cavalry, and he’d arrived at just the right moment with another thousand lancers to be the hammer to their anvil.

“Soon,” he said to his High Queen, then looking eastward. “Not today; not tomorrow. But soon. The Prophet Sethaz will be here and ready.”

Above them a glider turned in a greater circle with a glitter of aluminum and plexiglass; one of his, a pre-Change craft that needed no engine to fly, catapult-launched over the Columbia cliffs and riding the updrafts like a great-winged bird. His eyes turned grimly to the wheeling circle of living carrion-eaters below the human machine, ravens and buzzards tilting lower as the living humans withdrew. Comrade or foe, all the dead waited for them alike.

She nodded, following his thought. They’d been friends—anamchara, oath-bound kin of the soul—from the age of ten, though their parents had been at war then; and they’d been from Montival all across the continent to Nantucket and back together. Though they’d only been handfasted a bit more than a month, their minds operated with the sort of smooth unison he’d seen in couples forty years their senior.

Tiphaine d’Ath, Grand Constable of the Association, looked exhausted but grimly satisfied. He’d given her the task of delaying the enemy onset, and she’d managed a fighting retreat all the way from Walla Walla without letting the enemy trap her force.

And as is the usual case, I shall reward her good work with more work.

“Lady d’Ath, your field force is hereby dissolved with accolades for good service; I wanted you to screen us while we massed and you’ve done just that. The arrière-ban of the PPA has mustered and you’re in command of that, of course. You’ll deploy the Association foot to the right wing of our position and the chivalry will be part of our general reserve.”

“Forward base is at Goldendale, your Majesty?” she said.

“Yes, and our field hospitals and supplies will stage out of there. Mathilda has been overseeing our buildup in the area. Matti, you’d better brief the Grand Constable.”

She nodded, and d’Ath scrubbed at a spray of blood across her long stark-boned face.

“I’ll get there and see about slotting people in, then,” the Grand Constable said. “Her Majesty can brief me on the way back.”

Rudi nodded. “I’ll be there by dawn tomorrow; we’ll have everything up within two days except the rearguard. There’s enough forward to hold, but I don’t expect the onset until then.”

She nodded back. “They’ll want to have everything in place; they have the advantage of numbers, after all.”

The High King of Montival grinned starkly. “Yes. And we’ll see what we can do about that.” 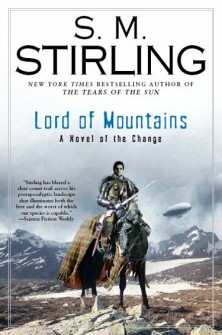