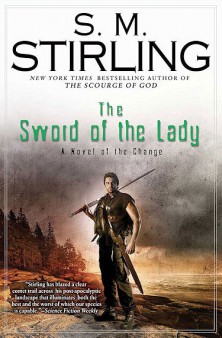 The Sword of the Lady

Rudi Mackenzie’s quest to find the source of the world-altering event known as The Change ends in Nantucket, an island overrun with forest and inhabited by a mere 200 people who claim to have been transported there from out of time. Only one odd stone house remains standing. Within it, Rudi finds a beautifully made sword seemingly waiting for him. And once he takes it up, nothing for Rudi or for the world that he knows will ever be the same…

The saga continues and grows—for a solitary business, you need a lot of help!

Thanks to my friends who are also first readers:

To Steve Brady, for assistance with dialects and British background, and also natural history of all sorts.

Thanks also to Kier Salmon, for once again helping with the beautiful complexities of the Old Religion, and with local details for Oregon. And for further use of BD!

To Diana L. Paxson, for help and advice, and for writing the beautiful ‘Westria’ books, among many others. If you liked the Change novels, you’ll probably enjoy the hell out of the Westria books—I certainly did, and they were one of the inspirations for this series. Also thanks for permission to use the lyrics of the songs in chapters 0,00, and 000, CDs of which may be obtained by going to www.westria.org

To Brenda Sutton, for multitudinous advice.

To Will Sanders, for putting me in stitches with Princess Yumping Yimminy; read his excellent mystery “Smoke” for his take on this—unbelievably—real-life character.

Thanks to John Miller, good friend, writer and scholar, for many useful discussions, for loaning me some great books, and for some really, really cool old movies. And to Gail Gerstner-Miller, ditto. Also the steak pie recipe was delicious.

Thanks again to William Pint and Felicia Dale, for permission to use their music, which can be found at http://members.aol.com/pintndale/ and should be, for anyone with an ear and salt-water in their veins.

And to Heather Dale for permission to quote the lyrics of her songs, whose beautiful (and strangely appropriate!) music can be found atwww.HeatherDale.com, and is highly recommended. The lyrics are wonderful and the tunes make it even better.

Much overdue thanks to Russell Galen, my agent, who has been an invaluable help and friend for a decade now. By a stunning non-coincidence, my career has shot up like a sapling in this period. We make a good team; not only is he smart as a whip on the business side, but his advice on literary matters and on the conjunction between the two has been spot-on.

2 Reviews for The Sword of the Lady