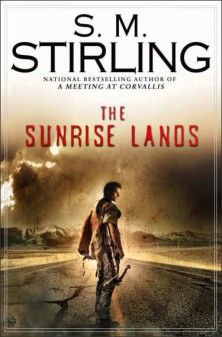 Rudi MacKenzie has grown up knowing that he will one day assume leadership over the survivors of the technological disaster known as the Change. But a prophecy made at his birth spoke of an even greater destiny?a destiny that is about to be fulfilled. A mysterious traveler from Nantucket, long rumored to be the source of the Change, arrives on a mission to bring Rudi back with him. And between him and his destiny lies the the cult of a madman determined to stop him?

These are getting dense and chewy. Trying to create a world, even in words, is good occupational therapy for lunatics who think they’re God, and an excellent argument for polytheism.

To Steve Brady, for assistance with dialects and British background, hints on birds, beasts and bugs… and spotting some howlers.

Thanks also to Kier Salmon, for once again helping with the beautiful complexities of the Old Religion, and with local details for Oregon, and spotting some howlers, including a 6-hour continuity gap. Ooopsie! Not God yet!

To Dale Price, help with Catholic organization, theology and praxis, and some excellent suggestions… and spotting some howlers.

To Melinda Snodgrass, Daniel Abraham, Sage Walker, Emily Mah, Terry England, George R.R. Martin, Walter Jon Williams, Yvonne Coats, Sally Gwylan, Laura Mixon-Gould and Ian Tregellis of Critical Mass, for constant help and advice as the book was under construction, which enabled me to avoid some howlers. And heck, they were already friends.

To John Ringo, for some advice.

Special thanks to Heather Alexander, bard and balladeer, for permission to use the lyrics from her beautiful songs which can be—and should be!—ordered at www.heatherlands.com Run, do not walk, to do so. I always do when she’s got a new CD out.

Special thanks… am I overusing the word?… to William Pint and Felicia Dale, for permission to use their music, which can be found athttp://members.aol.com/pintndale/ and should be, for anyone with an ear and salt-water in their veins.

They’ve not only allowed me to use their music, but to modify it, as for example Gwen’s lovely “New Forest”, the original lyrics of which can be found at:http://www.gwenknighton.com/lyrics.html

To Jan, forever and ever.