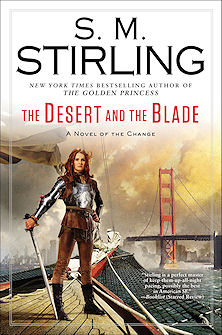 The Desert and the Blade
A Novel of the Change

Sequel to The Golden Princess. Crown Princess Órlaith of Montival and the new Empress Reiko of Japan and a small band of followers have set out to recover Kusanagi-no-Tsurugi, the Grass-Cutting Sword, a sacred symbol of the Japanese dynasty, that will help in the coming battles against powers that are not sympathetic to humans and human concerns.

To Harry Turtledove, for the loan of Topanga and the Chatsworth Lancers, with which he did things so intriguing I had to play with his toys. And very useful they turned out to be!

Thanks to Kier Salmon, unindicted co-conspirator, who has been my advisor and helper on the Change since the first. This was a big complex book and she helped immensely.

To Gina Tacconi-Moore, my niece, flower-girl at my wedding twenty-seven years ago, Queen of Physical Fitness and owner of CrossFit Lowell, who gave me some precise data on what a really fit young woman, such as herself, could do.

Pete Sartucci, knowledgeable in many aspects of Western geography and ecology, including the Mojave and Topanga, and convincing me that one scene went on too long and pointing out an embarrassingly large distance I hadn’t noticed.

To Cara Shulz, for help with Hellenic bits, including stuff I could not have found on my own.

To S.J. Tucker for permission to use the lyrics of her beautiful songs, which can be found at www.skinnywhitechick.com, and should be.

And to Lael Whitehead of Jaiya,  www.jaiya.ca, for permission to quote the lyrics of her beautiful songs.

Thanks again to Russell Galen, my agent, who has been an invaluable help, advisor and friend for a decade now, and never more than in these difficult times.

23 Reviews for The Desert and the Blade