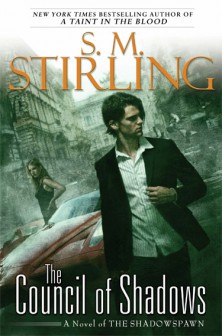 The Council of Shadows
A Novel of the Shadowspawn

Adrian Brézé defied his own dark heritage as a near-purebred Shadowspawn for years, until his power-hungry sister Adrienne kidnapped his human lover Ellen.

Now, Adrienne is dead, and the Council of Shadows is gathering its strength. To stop the Council from launching an apocalypse, Adrian and Ellen must ally with the Brotherhood, a resistance group dedicated to breaking the Council’s hold on humankind…by any means necessary.

In the coming confrontation, Adrian must fight not only the members of the Council but also his own nature-and, as he will come to suspect, traitors within the Brotherhood itself…

To Joe’s Diner, who make the best Greek salad in Santa Fe, and to Roland and Sheila Richter, proprietors, who put up with the weird guy in the far booth cackling and talking to himself as he typed. And to Lisa, favorite waitress.

One Review for The Council of Shadows