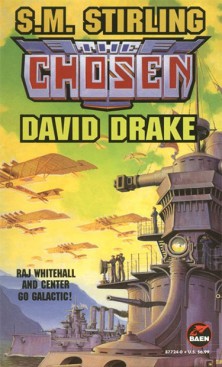 Planted by interstallar probes on hundreds of human-occupied worlds, the downloaded personalities of Raj Whitehall and the ancient battle computer known as Center work for planetary unity, preparing those worlds for membership of the Second Federation of Man. Excepton Visigar. On Visigar their work is to prevent unity, for on Visigar a nation-state of vicious militarists is about to start the final war to unite their world. If they succeed then it will only be a matter of time before they turn outward, taking their fatal racist infection with them to the stars. John Hosten is the son of a high general of the Chosen. Jeffery Farr is the son of an admiral of the only nation on Visigar that might be able to halt the march of tyranny. A strange twist of fate has united them in their hatred of all that the Chosen hope to do. Only they – with the aid of the disembodied voices of their mentors from the stars – stand between eternal tryanny for their world and eternal war for the galaxy.

One Review for The Chosen