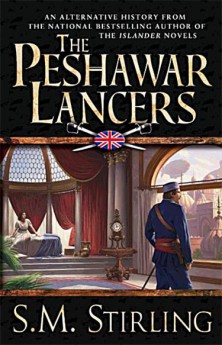 In the mid-1870s, a violent spray of comets hits Earth, decimating cities, erasing shorelines, and changing the world’s climate forever. And just as Earth’s temperature dropped, so was civilization frozen in time. Instead of advancing technologically, humanity had to piece itself back together….

In the twenty-first century, boats still run on steam, messages arrive by telegraph, and the British Empire, with its capital now in Delhi, controls much of the world. The other major world leader is the Czar of All the Russias. Everyone predicts an eventual, deadly showdown. But no one can predict the role that one man, Captain Athelstane King, reluctant spy and hero, will play….

To Harry Turtledove, for the gift of Hobson-Jobson, which was an immense help; and to Eric Flint, for recommending the Cultural Atlas of India.

To Mark Anthony, best chiropractor in the West.

For inspiration, I’d also like to thank Kipling, Mundy, Lamb, Merritt, Howard, Sabatini, Masters, Fraser, Burroughs, Wren, Kline, and all the others, the grand storytellers of adventure and romance.

One Review for The Peshawar Lancers