“This is the first series,” the project manager said; a stocky brown-haired woman in her thirties. The wall lit up with a three-dimensional rendering of a virus molecule. It was color-coded, black and scarlet. “Yo’see how we’ve replaced—”

“Doctor Melford,” the Senator said, with soft courtesy. The other members of the audience turned slightly to catch his words. “We’ve all absorbed as much technical information as possible from the prep-files, and while I’m sure the computer projections would be very interestin’, perhaps… ?”

He was a tall man, eagle-faced, with silver-streaked blond hair and mustache, conservatively dressed in indigo velvet and white lace. There was no impatience in his posture, leaning back at his ease in one of the two dozen swivel chairs that lined the little auditorium. Still, the woman in the white lab coat flushed slightly, coughed to cover it; her fingers moved on the controls.

“Well,” she said. Her vowels had a rather crisp tone, an East African accent; she had been born in these highlands. “Well, here are the recordings of the chimp results.”

The screen blanked for a moment and split. “The left is our control sample, an’ the right is the Series 24 D group.”

Two enclosures, sealed under glass but green with flowers and trees, like giant terrarias. The left showed a group of chimpanzees foraging, grooming, playing; one male reared up on his hind legs and then ran screaming down a slope, flailing the ground with a bamboo, a threat display. On the right, nearly the same.

“This is an hour after the introduction of the activating factor; yo’ understand, there has to be stress fo’ the altered enzyme chain to… Ah, here.”

One of the chimps in the right-hand group had snatched a palm-heart from her neighbor. The victim rolled back and bared her teeth, then suddenly leaped. Both animals went over in a blur of limbs and grass and shrieking.

“This is highly atypical, yo’ see. Chimps do fight to the death, but very seldom—yes.” The victor had risen, the blunt almost-human face wet with blood; she was dancing on the dying animal’s form, with leaps and arm-waving. The others were visibly agitated, hooting and moving back and forth in distress. Then two more began to fight; a mother picked up her infant and slammed it on the ground, over and over, until a big male leapt on her back and began tearing…

The Senator watched, stony-faced amid his silent aides. The plainly-clad woman at the heart of the other clump laughed aloud. A minute passed, and nothing living remained on the right-hand screen. To the left, a picture of the innocence before the birth of man.

She nodded eagerly.” ‘Specially since yo’ got us the new computer,” she said, one hand caressing the row of pens in her breast pocket with a nervous gesture.

The Senator smiled for the first time. “Thank the Yankees; it was the best we could steal,” he said dryly. “How confident are yo’ that these-here results can be transferred to humans?”

“Very, yes,” the geneticist nodded. “Chimps are the best possible test subjects, they’re so close to us. Ninety-eight percent genetic congruence, only five million years since the last common ancestor, which… Yes. We’ve managed to move the focus of the infection from the immune to the limbic systems without’n much trouble; the original affected the neurological… Well, it wasn’t much trouble. The problem is gettin’ it activated with the sort of arbitrary external stimulus yo’ wanted, sir. We’ve gotten promisin’ results usin ‘particular frequencies of strobe-lightin’, the grand mat trigger effect, yo’ know? The endorphine response is modified into a feedback loop. That still needs work.”

The woman to the Senator’s left spoke, in a flat Angolan accent: “What’s y’re success rate?” She was younger than the Senator, perhaps forty-five, head of a committee in the House of Representatives that attracted little public attention.

Melford nodded at the right-hand screen. “Ovah 99%; no point in ‘finin’ it down further until we moves to human subjects.”

“In y’ professional opinion, is this project go or no-go?”

“Go.” A decisive nod. “Provided we get the necessary fundin’ an’ personnel. Mo’ work on the vector—we’re still relyin’ on blood to blood—and the secondary keyin’ sequence. Four years, eight maximum an’ well have it on-spec.”

“Chiliarch,” the Senator said. A man in the olive-green uniform of the Security Directorate spread his hands and laid his fingertips on the desk before him.

“It’s tight. Jus’ this one facility, an’ the Institute’s normal activity is good cover. The computer’s not physically connected to any datalink. Nothin’ certain in my line of work, but I’d bet mah tender pink ass this’un can be kept close. Until operational deployment, of course.”

“Ah.” The Senator dropped his chin onto the steepled fingers of both hands, and the lids drooped over his narrow gray eyes. “Doctor, what about keepin’ it from the Yankees when we deploy it against the Alliance?”

“Well.” A frown. “Well, they’re not as, ummm, sophisticated at biotech as we are. Those Luddite fanatics of theirs who keep protestin’ every time they try to use somethin’, and then again they can’t test humans to destruction the way we can. Sloppy. Still, they’ve got some good people.”

She paused. “Very unlikely fo’ the virus to be discovered—I’m assuming nothin’ goes wrong with the clandestine operations side. We’d have trouble findin’ that bug iff’n we didn’t know what to look for. These retroviruses are cunnin’ critters at concealin’ themselves, and we’ve tweaked it until even the immune system is completely fooled. Yo’d have to puree the subject’s nerve tissue an’ do a congruent-DNA sample test series… unless it was activated, of course. That’d produce gross abnormalities and yo’ could follow them back. It’s less a disease than gene-surgery, really.”

The Senator looked across to his colleague; she nodded and spoke: “What’ll yo’ need?”

“Ummm, more funding. More personnel, as Ah said. And experimental subjects, of course. Several hundred humans, assorted gender an’ age in the postpubescent range, prefrably the same ethnic mix as the target population. Very delicate to get it contagious but with a failsafe turn-off. Don’t want it becomin’ a global pandemic, do we?”

“Wodan, no,” the Senator said. “Well, Doctor Melford, certain othahs will have to be consulted, but unofficially I think yo’ can take it that the project will be approved fo’ further development.” He rose. “Service to the State.”

“Glory to the Race,” the scientist answered absentmindedly as the audience left; she was keying the machine again, reviewing the additional resources that would be needed.

“Nice view,” the Senator said, nodding down from the terrace toward the lake and drawing on his cigarette.

The Virunga Biocontrol Institute was built in the hills overlooking Lake Kivu, at the southern edge of the Virunga range. A century old now, almost as old as Draka settlement in these volcanic highlands. Low whitewashed buildings of stone-block, roofs of plum-colored tile, almost lost among the vegetation; the gardens were flamboyantly lovely even by the Domination’s standards, fertile lava soils and abundant rain and a climate of eternal spring. National park stretched north and west, to the Ituri lowlands: haunt of gorilla and chimp, elephant and hippo and leopard; of the Bambuti pygmies also, left to their Old Stone Age existence.

Plantations stretched widely elsewhere across the steep slopes, green coffee and tea and sheets of flowers grown for air-freighting elsewhere; the air was scented with them, cool and sweet. The city of Arjunanda lay two thousand feet below by the waters, turned to a model by distance: buildings white and blue and violet with marble and tile, avenues bordered with jacaranda and colonnades roofed in climbing rose and frangipani. Even the factories and labor-compounds that ringed it were comely, bordered by hedge and garden. Sails speckled the waves, and they could see the pleasure boats beating back toward the docks, and dirigibles lying silvery in the waterfront haven.

“It’s a famous beauty-spot,” the woman said with elaborate sarcasm, indicating the sun setting behind the mountains to their right, amid clouds turned to the colors of brass and blood. “No mo’ games, man.”

He flicked the butt of the cigarette over the railing. Like her, to be cold even when she’s angry. You can see why our enemies nicknamed us ” snakes,” looking at her. The burning speck fell like a tiny meteor, to lie winking for a second before one of the Institute outdoor serfs arrived to sweep it up.

“It will work. This time yo’ suspicions of biotech don’t wash. And this project was mah price fo’ supportin’ yo’ pet schemes.”

They gave each other a glance of cool mutual hatred and turned again to the view beneath. Shadow was falling across the city and the lake as the first stars appeared above. The streetlights of Anunanda flicked on in a curving tracery, and the lamps of the plantation manors scattered down the hills. An airship had cast off from the haven, and the thousand-meter teardrop rose from darkness into light as it circled, bound northward with cut flowers and electrowafers, strawberries and heavengrape wine.

“Have yo’ ever wondered,” the Senator said meditatively, “why we Draka love flowers so?”

The woman blinked, her fox-sharp face shadowed in the dim glow. “No, can’t say as I have,” she said neutrally. “Why?”

“They’re safer to love than human bein’s,” he said thoughtfully. “An’ unlike humans, they deserve it.” He turned. “I’ll be in contact aftah I speak to the Archon.” 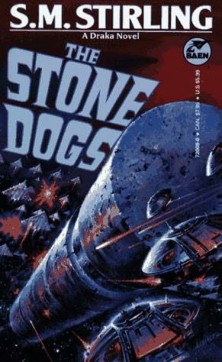