Captain Marie Graber turned to look over her shoulder, back down the narrow mountain trail. Three or four soldiers behind trod the golden haired woman who ignited the joy in her soul. Marie grinned. Sergeant Serena Burns looked up and caught her glance, returning the smile with interest.
The Captain’s heart lifted as she turned forward again and continued to climb. It was hard to remember the icy bleakness that had hollowed her out for so long now that she had Serena. Her lover had renewed her hope almost from the first moment they’d met. The thin highland air smelled sweet, even sweeter than the smell of resin from the pines all around.
Marie and her team had been holed up in Boulder, running low on almost everything but sweet potatoes of which they hadn’t that many. God! How she hated sweet potatoes. Serena had arrived with dispatches and a chunk of maple sugar. It was love at first sight.
The sergeant had been with her for six weeks now as they’d wended their way back to base. Now the Captain was going to have the honor and the pleasure of presenting her beloved to the supreme commander. General John Connor. The man who was going to save the human race. She was near bursting with pride. I can hardly wait.
Serena watched the captain climb with satisfaction. She’d been with Connor’s army for less that six months, most of that time delivering dispatches. Most of them reading the same way they did when given to her. Some had been artfully altered, so that the results favored Skynet forces. Some were delivered just too late, but with sufficiently desperate effort that no questions were asked, no blame ascribed. She grinned. Even though she wasn’t human she just had to admit there was pleasure in a job well done.
Every step upward brought her closer to the ultimate goal, the destruction of John Connor and, if she was fortunate, his senior support staff. Many of them were supposed to be with him on this occasion. True, it might not save Skynet, whose defense grid was smashed, but it might slow things down enough to make a difference. One thing Serena had learned in her time with humans was that refusing to admit defeat often averted same.
It would certainly extinguish her. But you couldn’t have everything; something the captain was fond of saying. Skynet would go on, that was the important thing. And Skynet was the most important part of her.
As she neared the top of the steps Serena twitched a muscle deep inside and started the countdown on the bomb she carried within. A sidebar in her vision began a countdown. Her head came above the steps and through the crowd she could at last see him. John Connor.
He smiled and shook the hand of the man before him. Even from behind Serena could tell that the soldier would have stars in his eyes. The count was fifteen seconds.
Return to base.
Automatically Serena stopped the countdown. She stepped back, covered her mouth as though she was going to be sick and widened her eyes to a semblance of desperation. Soldiers stepped aside sympathetically.
“I’ll explain to the captain,” one of them whispered.
She waved her hand in appreciation and fled… 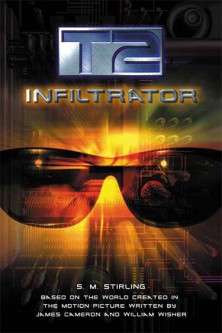