To coin a phrase, the 20th century has been the best of times, and the worst of times; the century when smallpox was abolished and the century when a new word, “genocide,” entered the lexicon of politics. It started with the serene confidence of the Edwardian Enlightenment at the end of a century free of great international wars, when reason and progress seemed to be rolling forward on a broad invincible front.

Then it took a wrong turning in the slaughters of Passchendale and Verdun, descended into the abyss of Stalingrad, Nanking, Buchenwald and the Gulag. Even the motor of progress, science, turned out to have some very nasty exhaust. For fifty years we hovered on the brink of annihilation, forced to threaten the survival of civilization, if not humanity, to hold totalitarianism in check.

Anyone who studies history eventually runs across a little jingle that goes:

What’s more, you come to appreciate the essential truth of it. There are broad, impersonal forces at work in history; if Christopher Columbus had died as a child—most children did, in his age—someone else would have discovered the Atlantic crossing soon enough. Basque fishermen may well have crossed to Newfoundland before him; an English expedition set out to America a few years after; the Portugese blundered into Brazil on their way to India (it makes sense, in sailing-ship terms) a few years after that.

The knowledge was there, and the ships, and the civilization that produced them, a strong hungry people ready to burst out upon the world. And so we live in the world the West Europeans made, built on foundations laid by the empires of sailing ships and muskets.

But oh, how the details would be different if it had not been Columbus, but another man a few years later! And how those changes might have rippled on, growing through the years.

So a thought came to me; suppose everything had turned out as badly as possible, these last few centuries. Great changes make possible great good and great evil. The outpouring of the Europeans produced plenty of both.

The great free colonies of North America were perhaps the best, for it was here that the great 18th-century upsurge of popular government began, and here the power that broke the totalitarians was founded. My friend Harry Turtledove has imagined a world in which America broke apart in its Civil War, and no strong United States was ready to come to the aid of the beleaguered Allies against the Central European aggressors.

Imagine a change even more fundamental. Perhaps the worst product of the great wave of European expansion, before this century of ours, was the South Atlantic system of slaves and plantations. Eventually it faded away—or was blown away by the cannon of Grant and Sherman, although we still feel the aftereffects.

What, though, if a fragment of that system had fallen on fertile ground, and grown? Say that the potential of South Africa, so neglected by its Dutch overlords, had fallen prey to it . . . a base for that deadly seed to grow, unchecked by free neighbors, until it was too strong to stop. An Anti-America, representing all the distilled negatives of Western civilization.

From that thought was born the alternate-history of the Domination of the Draka. I’ve chronicled the rise and transformation of that dystopia in four novels.

But a world can be a playground big enough for more than one imagination to run in. Here are stories others have set in that anti-history, a funhouse mirror held up to our own. 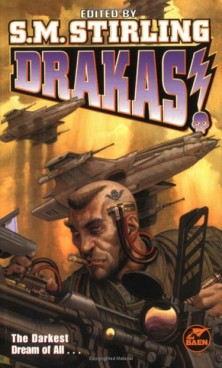