353 Against the Tide of Years: Prologue | S.M. Stirling

“Since the Event, everything has changed. We’ve had to just accept it — those who didn’t go into shock and never come out — we had a lot of suicides those first few months — like time itself, a mystery we’d never solve. Many couldn’t accept it, and I think that accounts for a lot of the craziness that bubbled up in the first year or two. On top of it all, William Walker headed off to England with his band of thugs, to set himself up as a king, and we had to fight a war to stop him. If he’d stayed up in the Twentieth, maybe Walker would never have been more than a mildly amoral officer in the Coast Guard instead of a warlord and emperor, and his bitch-queen Hong would certainly never have had the opportunity to rival Elizabeth Bathory and Giles de Rais in the atrocity league.

God knows, I like to think the rest of us have improved on the original history a bit, where we could; spreading potatoes and sanitation, putting down human sacrifice and slavery. Mind you, there are still times when I wake up and expect to hear radios and cars! Now we’ve had a few years of comparative peace, and things are looking up. For now. What really worries me is that we couldn’t finish Walker off…”

Agamemnon son of Atreus, King of Men, High Wannax of Mycenae and overlord of the Achaeans by land and sea, decided that he loved cannon.

“You did not lie,” he said, stroking the bronze shaped by the stranger’s art and smiling like a wolf at the shattered section of fortress wall. He inhaled the stink of burnt sulfur as if it were perfumed oil.

“You can make more of these?” he barked.

The outlander bowed. “If I have the metal and workmen I need, lord King,” he said in fluent Greek with a whistling, nasal accent. “And the authority to commandeer materials.”

“By Zeus Pater, Zeus Father of Gods and men,” Agamemnon swore. “You shall have what you require — and besides that, you shall have land of me, houses, gold, horses, slaves, comely women, fine rainment, weapons, yes, and honor in my house among my ekwetai, my sworn companions!”

The outlander bowed again. Wil-iam Walkeearh, that’s his name. Hard to remember the foreign sounds… there were murmurs at the king’s back, from nobles displeased at seeing an outlander raised so high among them a bare few weeks after he arrived at Tiryns, Mycenae’s port. Fools.

“Never have I seen or heard of anything like this,” he said, as the gathering began to disperse. “Not even among the Hittites or the clever Sudnu, the Sidonians.”

Agamemnon’s personal guard fell in behind them, sunlight breaking red off the whetted bronze blades of their ready spears, eyes wary under their boar’s-tusk helmets.

“And to find such among the savages of the northlands…” the king shook his head. “Where comes this knowledge of throwing thunderbolts?”

“Ah, my lord king,” the tall stranger said. “That is a very long story.” 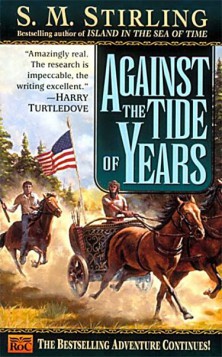