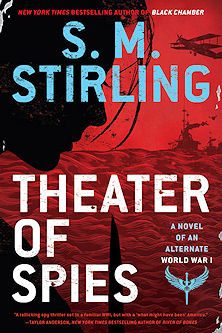 Book 2 of S.M. Stirling’s “Tales from the Black Chamber” series, published in May 2019.

The German attack aimed at preventing the Americans from entering the Great War in 1916 has been defeated, and now the Black Chamber agents Luz O’Malley and Ciara Whelan are sent to Berlin to investigate a new weapon that is supposed to make the German Navy unstoppable.

This book is a sequel to “Black Chamber”.

To Kier Salmon, longtime close friend and valued advisor. Whose help with things in Spanish and about Mexico—she lived there into adulthood—has been very, very helpful with this series, as well as her general advice to which I have always listened carefully. My mother grew up speaking Spanish too (in Lima, Peru), but alas she and my aunt used it as a secret code the children couldn’t understand, and Kier has been invaluable to fill in those lacunae, as well as being a fine editor (and promising writer) in her own right.

To Dave Drake, for help with the Latin bits and a deep knowledge of firearms acquired in several different ways. Also, collaborating with him taught me how to outline.

To Alyx Dellamonica, for advice, native-guide work, and just generally being cool. Her wife, Kelly Robson, is cool too and an extremely talented writer now winning implausible numbers of awards. An asteroid would have to strike Toronto to seriously dent the awesomeness of this pair. Soon Alyx will have another book out and it is great; I say this with smug certainty, since I got to read it in manuscript. Fortunately, writing is one of those fields where you have colleagues, not competitors.

To Patricia Finney (aka P. F. Chisholm), for friendship and her own wonderful books, starting with A Shadow of Gulls (which she wrote when she was in her teens, at which point I was still doing Edgar Rice Burroughs pastiche fanfic) and going on from there. One of the best historical novelists of our generation!

And to Joe’s Diner (joesdining.com) and Ecco Gelato & Expresso (eccogelato.com) here in Santa Fe, for putting up with my interminable presence and my habit of making faces and muttering dialogue as I write.

3 Reviews for Theater of Spies