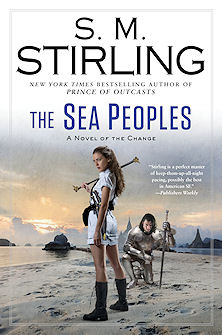 Book 4 of S.M. Stirling’s Emberverse V series (or The Change, book 11),  published in October 2017. These books are set in the same world as the “Dies the Fire” trilogy and the “The Change” series.

It’s Change Year 46, two generations after high-energy technology died in a catastrophe most of the human race didn’t survive.
Crown Princess Órlaith and her brother Prince John Arminger Mackenzie take center stage as the children born after the Change and their children battle against powers that are not sympathetic to humans and human concerns.

This book is a sequel to “The Golden princess”, “The Desert and the Blade”, “Prince of outcasts”, and earlier books in the series.

36 Reviews for The Sea Peoples