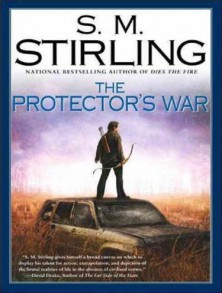 It’s been eight years since the Change rendered technology inoperable across the globe. Rising from the ashes of the computer and industrial ages is a brave new world. Survivors have banded together in tribal communities, committed to rebuilding society. In Oregon’s Willamette Valley, former pilot Michael Havel’s Bearkillers are warriors of renown. Their closest ally, the mystical Clan Mackenzie, is led by Wiccan folksinger Juniper Mackenzie. Their leadership has saved countless lives.

But not every leader has altruistic aspirations. Norman Arminger, medieval scholar, rules the Protectorate. He has enslaved civilians, built an army, and spread his forces from Portland through most of western Washington State. Now he wants the Willamette Valley farmland, and he’s willing to wage war to conquer it.

Thanks to Wayne Throop, a valiant laborer in the handwavium mines and the unobtanium smelter, for help with technical explanations; to Harry Turtledove for a Monty Pythonesque remark which gave me a flash of inspiration (or at least that’s what I call it) and some excellent advice on how to integrate a subplot; to John Whitbourn (author of the excellent Downslordseries and much else) and Steve Brady, for help with dialects; to Steve Brady again for going all around Robin Hood’s barn, or at least Bedfordshire and Buckinghamshire, helping with research; to Kier Salmon, for once again helping with the beautiful complexities of the Old Religion; to Don Ware for information on Brownsville, which appears—somewhat fictionalized!—in the book; to Melinda Snodgrass, Daniel Abraham, Emily Mah, Terry England, George R.R. Martin, Walter Jon Williams, (put in new members) of Critical Mass, for help and advice.

To my nephew, Gregory Taconi-Moore. Long life, health, many tubas.