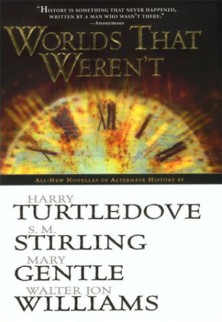 Shikari in Galveston
Novella in Worlds that Weren't

Shikari in Galveston takes place in Texas a century after a meteor shower devastated North America and Europe. The disaster led to a society in Texas that has evolved into a mixture of Native American and European society. The British Empire, or the Angrezi Raj, has been expanding its influence into the area using Galveston as a base.

British cavalry officer Eric King, is assembling a hunting party which includes the revenge seeking Sonjuh, who lost her family to the cannibals and Robre, a young hunter of the Cross Plains tribe who hopes to earn a rare rifle from King. Meanwhile Russian agents plan to incite a tribe of cannibals to destroy the British allied tribes of former Texas.