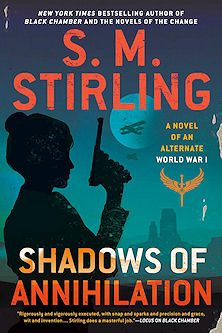 The great war has become a stalemate, with a terror balance where each side can threaten the other with “annihilation gas”. It is of vital importance to the USA that their production facilities are safe from German attacks or sabotage attempts, so the president assigns agents Luz O’Malley and Ciara Whelan to guard the security of a new plant.

This book is a sequel to “Theater of Spies”.

To Kier Salmon, longtime close friend and valued advisor. Whose help with things in Spanish and about Mexico, where most of this book is set—she lived there into adulthood—has been very, very helpful with this series. As well as her general advice to which I have always listened carefully. My mother grew up speaking Spanish too (in Lima, Peru), but alas she and my aunt used it as a secret code the children couldn’t understand, and Kier has been invaluable to fill in those lacunae, as well as being a fine editor (and promising writer) in her own right.

To Alyx Dellamonica, for advice, native-guide work, and just generally being cool. Her wife Kelly Robson is cool too and an extremely talented writer now winning implausible numbers of awards. An asteroid would have to strike Toronto to seriously dent the awesomeness of this pair. Soon Alyx will have another book out and it is great; I say this with smug certainty, since I got to read it in manuscript. Fortunately, writing is one of those fields where you have colleagues, not competitors.

And to Joe’s Diner (http://joesdining.com/) and Ecco Gelato & Expresso (http://www.eccogelato.com/) here in Santa Fe, for putting up with my interminable presence and my habit of making faces and muttering dialogue as I write.

To Jan, for thirty years of love, happiness and comradeship.

3 Reviews for Shadows of Annihilation