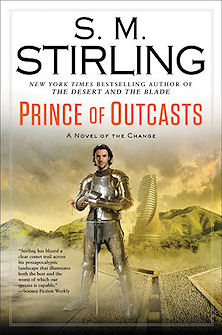 Sequel to The Golden Princess and The Desert and the Blade.
Prince John Arminger Mackenzie, younger brother of Crown Princess Órlaith, takes center stage as the children born after the Change and their children battle against powers that are not sympathetic to humans and human concerns.

Thanks to Kier Salmon, unindicted co-conspirator, who has been my advisor and helper on the Change since the first.

To Gina Tacconi-Moore, my niece, flower-girl at my wedding twenty-eight years ago, Queen of Physical Fitness and owner of CrossFit Lowell, who gave me some precise data on what a really fit young woman, such as herself, could do.

Pete Sartucci, knowledgeable in many aspects of Western geography and ecology, including the Mojave and Topanga.

To Cara Schulz, for help with Hellenic bits, including stuff I could not have found on my own.

To Lucienne M. Brown, Pacific-Northwesterian and keen wit, for advice and comments.

Special thanks to Heather Alexander, bard and balladeer, for permission to use the lyrics from her beautiful songs which can be—and should be!—ordered at http://faerietaleminstrel.com/ Run, do not walk, to do so.

And to Three Weird Sisters—Gwen Knighton, Mary Crowell, Brenda Sutton, and Teresa Powell—whose alternately funny and beautiful music can be found at http://www.threeweirdsisters.com/.

To S.J. Tucker for permission to use the lyrics of her beautiful songs, which can be found at http://sjtucker.comwww.skinnywhitechick.com, and should be.

And to Lael Whitehead of Jaiya, http://www.broadjam.com/ for permission to quote the lyrics of her beautiful songs. One of which became the Montivallan national anthem.

Thanks again to Russell Galen, my agent, who has been an invaluable help, advisor and friend for decades now, and never more than in these difficult times. I’ve had good editors, but none who’ve helped my career and work as much.

To Jan, and it always feels good to say that.

24 Reviews for Prince of Outcasts