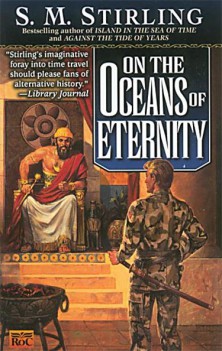 On the Oceans of Eternity

Ten years ago, inhabitants of the twentieth century and the Bronze Age were tossed together by the Event. But as two worlds converge, only one can be the victor in a battle to lead this strange new world.

Many thanks to the cadets and staff of the Coast Guard Academy, New London, CT, for their hospitality and interest; special thanks to Professor Faye Ringle of the Academy; and to the officers and crew of Eagle, for the guided tour.

My apologies her captain for the unspeakable things I did to his cabin.

Thanks to William Pint and Felicia Dale for permission to quote from their beautiful songs in: Hearts of Gold, c. 1994, Round the Corner, c. 1997, When I see Winter Return, c. 1997, Waterbug Records; available at http://members.aol.com/Pintndale/

And to Tony Goodenough, for permission to use lyrics from Pump Shanty.

Thanks also to Ms. Margarita Booker of Ronald Wharton Rifles, and to Mr. Geoffrey Boothroyd.

My thanks to Bobby Hardenbrook for his help with the website.

All errors, ommissions, infelicities and lapses are purely mine.

To Alfred Bruce Stirling - who deserves all the blame for this. Or at least half of it.

2 Reviews for On the Oceans of Eternity