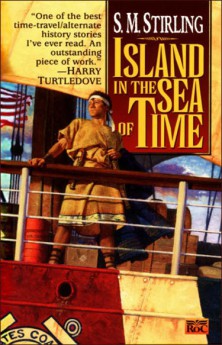 Island in the Sea of Time

It’s spring on Nantucket and everything is perfectly normal, until a sudden storm blankets the entire island. When the weather clears, the island’s inhabitants find that they are no longer in the late twentieth century…but have been transported instead to the Bronze Age! Now they must learn to survive with suspicious, warlike peoples they can barely understand and deal with impending disaster, in the shape of a would-be conqueror from their own time.

Many thanks to the people of Nantucket, and none of the characters in this book are intended to represent any individuals living or dead! Thanks also to the United States Coast Guard, which responded nobly to the ignorant inquisitiveness of the author. All errors, mistakes, lapses of taste, and infelicities of expression are purely mine. Admiration and thanks also to the archaeologists and historians who piece together the past of our species from shards and the equivalent of landfill.

Particular thanks on-island to Tracy and Swede Plaut; to Randy Lee of Windshadow Engineering; to Wendy and Randy Hudson of Cisco Brewers (who make a great pale ale); to Harvey Young, the friendly (common) native Nantucketer (less common) at Young’s Bicycles; to the Bartletts of Ocean View Farm; to Mimi Beman of Mitchell’s Book Corner; and to many, many others.

Thanks also to Chief Petty Officer James for the tour and answering an afternoon of questions on his lovely ship!

And to John Barnes for dialectical (in both senses of the word) help; to Poul Anderson for catching a couple of embarrassing errors; to Heather Alexander for the use of her beautiful Harvest Season; to Laura Anne Oilman, for really editing; and to Walter John Williams for the manuals.