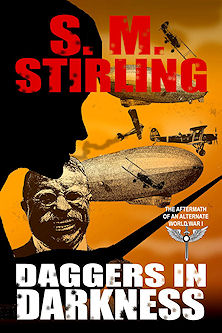 Book 4 of S.M. Stirling’s “Tales from the Black Chamber” series

And to Joe’s Diner (http://joesdining.com/)and Ecco Gelato & Expresso (http://www.eccogelato.com/) here in Santa Fe, for putting up with my interminable presence and my habit of making faces and muttering dialogue as I write. May they survive the apocalypse and flourish once more.

To Jan, for everything, always.