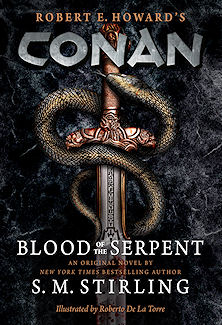 Conan – Blood of the Serpent

Conan the Barbarian returns in an all-new novel by S.M. Stirling, which is tied directly to the famous works by Conan’s legendary creator, Robert E. Howard.

Set early in his life, Conan has left his northern homeland to cut a bloody swath across the legendary Hyborian Age. A mercenary, a soldier, a thief, and a pirate, he faces conquering armies, malicious sorcerers, and monstrous creatures—against which he wields only the sword held in his powerful grasp.

3 Reviews for Conan – Blood of the Serpent