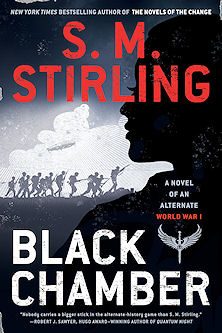 Book 1 of a new Alternate History series “Tales from the Black Chamber”.

This takes place in 1916 in a world where Theodore Roosevelt became president of the U.S.A. in 1912, and features a covert-ops organization named “The Black Chamber”.

Errata: There were errors in the chapter headings for some chapters.

To Kier Salmon, longtime close friend and valued advisor. Whose help with things in Spanish and about Mexico—she lived there into adulthood—has been very, very helpful with this one, as well as her general advice to which I always listen carefully. My mother grew up speaking Spanish too (in Lima, Peru), but alas she and my aunt used it as a secret code the children couldn’t understand, and Kier has been invaluable to fill in those lacunae, as well as being a fine editor (and promising writer) in her own right.

To Markus Baur, for help with the German language. Tho’ he did chuckle at “pigdog”.

To Dave Drake, for help with the Latin bits and a deep knowledge of firearms acquired in several different ways.

To Alyx Dellamonica, for some really good advice on how to handle a crucial relationship. Bless the Aunties!

To Patricia Finney, for friendship and her own wonderful books, starting with A Shadow of Gulls and going on from there.

To Roland and Sheila Richter at Joe’s Diner of Santa Fe—for putting up with me using their place as an unofficial office, not charging me rent, and for Roland helping me with some German subtleties. Besides, Joe’s is a really good diner.

To Jan, in all possible worlds!