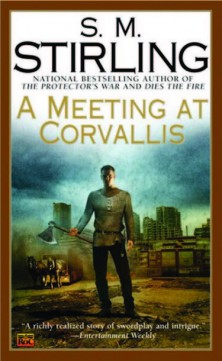 A Meeting at Corvallis

In the tenth year of The Change, the survivors in western Oregon have learned how to live in a world without technology. But a confrontation between the forces of those who would rebuild the world peacefully and the feared Protector, who will use whatever means at his command to extend his power, threatens to plunge the entire region into open warfare.

To Steve Brady, for assistance with dialects, and saving me from a couple of embarrassing faux pas about home-brewed beer and other things—as the saying goes, it ain’t what you don’t know that’ll kill you, it’s what you think you know that ain’t so. Sample the Real Ale for me!

Thanks also to Kier Salmon, for once again helping with the beautiful complexities of the Old Religion, batting ideas on how it might develop in this (thankfully!) alternate history back and forth, giving me first-hand reports and pictures of Oregon locations, coming up with the great idea about the ox, and other nifty ideas.

To Dale Price, for giving me help with Catholic background, and some excellent suggestions.

To Melinda Snodgrass, Daniel Abraham, Emily Mah, Terry England, George R.R. Martin, Walter Jon Williams, and Laura Mixon-Gould of Critical Mass, for constant help and advice as the book was under construction. And heck, they were already friends.

Special thanks… am I overusing the word?… to William Pint and Felicia Dale, for permission to use their music, which can be found at members.aol.com/pintndale/ and should be, for anyone with an ear and salt-water in their veins.

Thanks again to everyone from the author of Amadis of Gaul on down. Writing is a solitary occupation, but we aren’t alone!

To Harry Turtledove; true gentleman, wise scholar, fine writer, good friend, and inspiration to us all. We need all the kalos k'agathos we can get.